Ever noticed your heat running during the setback period for time-of-day electric rates? Here is the solution.

Time-of-day rates result in significant energy savings if you can shift your energy usage to off-peak hours. These rates reward you for keeping energy use low during designated peak hours. One of the most important steps to achieve these savings is to set back your thermostat set point during peak hours. My house is well enough insulated that I do not want my heat pump to run at all during peak hours.

As thermostats have become “smarter,” programming them to NOT heat during set back periods has become a little more complex. Early programmable thermostats simply changed the set point at programmable times. Newer smart thermostats, including Nest, anticipate the next temperature setting and respond accordingly. During heating season, they will call for heat during the last 30 to 60 minutes of setback period so as to arrive at the new set point at the programmed time. This is terrible for those of us on time-of-day rates, as it causes a big power surge before peak hours are over.

For example, my electricity provider’s peak hours last from 7:00 a.m. to noon. I am penalized for using high power during this period. With early programmable thermostats, I just programmed my set point for 72 degrees F for normal hours but for 63 degrees F for peak hours. This was sufficient  to prevent my heat from running between 7:00 a.m. and noon. However, with the same programming, my newer Nest and Carrier “smart” thermostats begin heating roughly half an hour before noon, to allow the heat pump to gradually raise the temperature to the new set point. This is bad for energy usage during peak hours.

This program is repeated daily Monday through Friday. Below is the winter temperature program for my Nest thermostat. 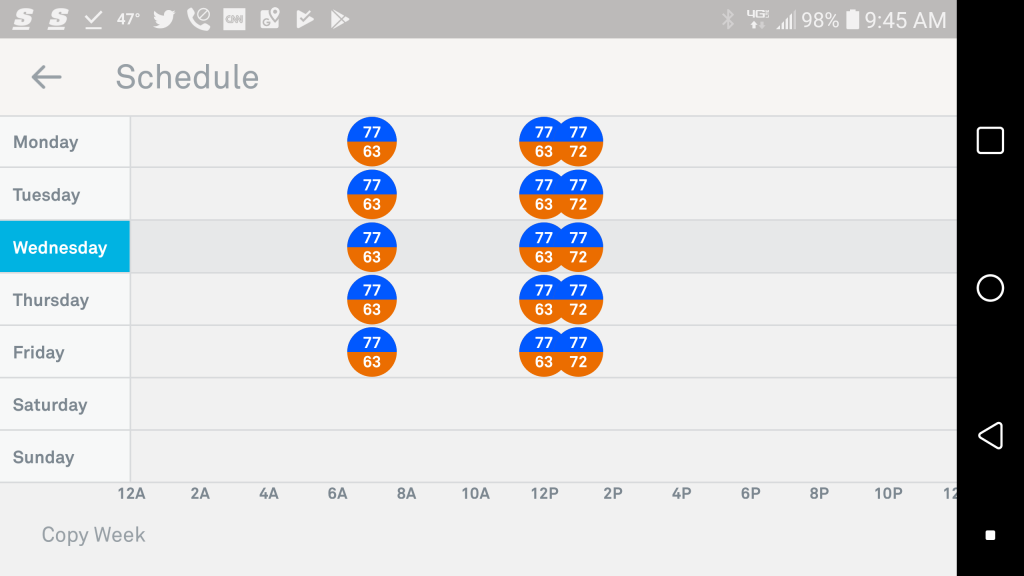 That is all it takes. With the noon set point matching the 7:00 a.m. set point, the thermostat will not call for heat until some time between noon and 1:00 p.m.

Thanks to the tech support at Nest for teaching me this.